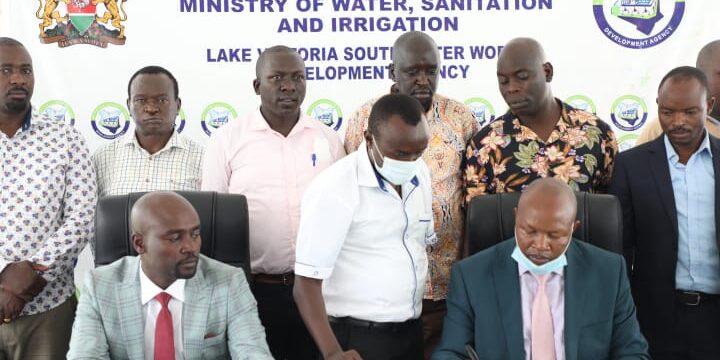 The persistent water dispute between Kericho and Bomet counties over the management of water from Itare water project has finally been resolved. Residents of Litein ward and parts of Bureti sub county now have a reason to smile after a task force drawn from the two counties resolved key among other issues the immediate resumption of bulk water supply to Kericho County. In what appeared as a well played-out and successful water diplomacy, Bomet Governor, Prof. Hillary Barchok and his counterpart Prof. Paul Chepkwony, signed a joint 5-year agreement. In the agreement, Kericho committed to subsequently settle the outstanding debt of Ksh. 29.5m owed to BOMWASCO within a period of three months. The agreement also seeks to improve the production of water and repairment of the main trunk lines. The negotiations were midwifed by Lake Victoria South Water Works Development Agency led by its chairman Mr. Dan Owino and brought together the Water Service Providers from the two counties, BOMWASCO and KEWASCO. The dispute has seen over 40,000 residents of Bureti Constituency in Kericho County go without water for months on end.