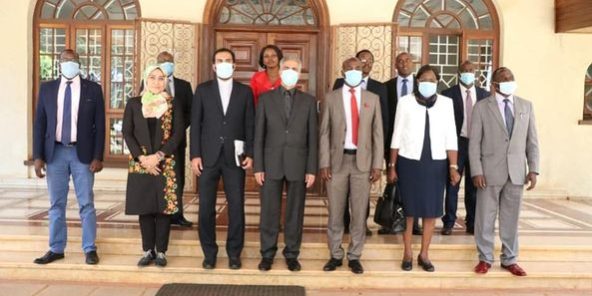 Bomet will soon export its tea to Iran following fruitful talks with the Iranian Embassy, Wednesday between Governor Dr Hillary Barchok and the Iranian Ambassador to Kenya H.E Jafar Barmaki.

The talks sought to strengthen bilateral trade ties especially on tea and horticulture produce. Speaking during the visit, Dr Barchok said that as an agricultural County, his administration seeks to build and expand the trade portfolio by leveraging on the County’s agro-processing prowess. He noted that Iran was a strategic partner and an emerging market that would accord Bomet an opportunity to market its tea direct from the point of production “Tea production is one of our main economic activity but we have been having problems with marketing. We want to tap into the lucrative Iranian market.” Governor Hillary Barchok said.

On his part, the Iranian Ambassador to Kenya Jafar Barmaki described Kenyan tea as one of the best in the world. He said investors have been attempting to get direct access to Kenyan tea for years. “Very few Iranians can afford Kenyan tea because of its taste and quality. If I need Kenyan tea, I have to order from Europe and that makes it unaffordable to many Iranians,” Mr Barmaki said.

In 2019, the export of tea to Iran dropped to 532,715kilogrammes from 590,111 the previous year. Bomet produces an estimate of 350,000 metric tonnes of high quality tea annually. Bomet strives to capitalize on its vast tea plantations totaling 50,000 hectares.