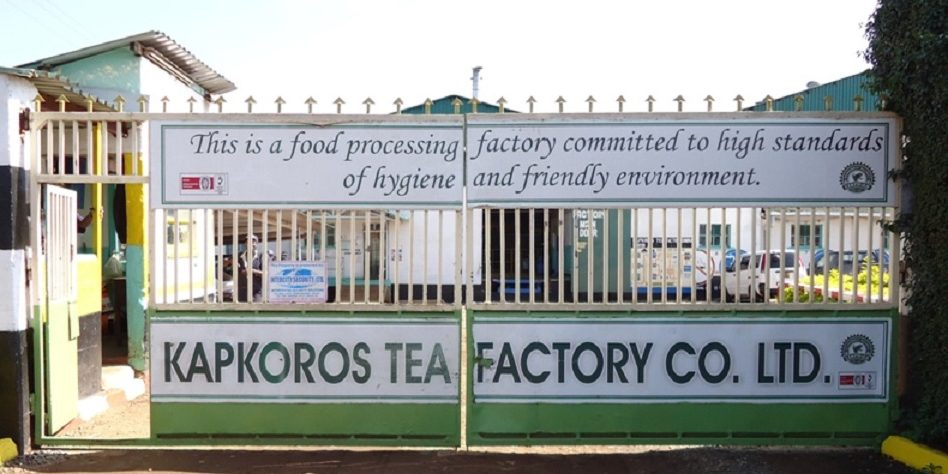 Kapkoros Tea Factory Co. Ltd. was incorporated under the Companies Act (Cap 486) by registrar of companies on 11th February 1977 and construction work started the same year. It was commissioned in 1976 by the late his Excellency President Jomo Kenyatta to serve the then emerging small scale tea farmers in the region of the then Bomet District.

The factory is situated in Rift Valley Province, Bomet County, Bomet Central Division, Sibaiyan Location, Sibaiyan sub-location of Bomet Central constituency. The factory is situated 15 Km from Bomet town off Bomet – Litein road and some 344 Km from Nairobi at an altitude of between 1540-2100m above sea level. The factory can be reached easily from Bomet within a short time since it is well served with all weather roads.

One can also reach Kapkoros from Nairobi within three hours. Kapkoros Factory has one of the largest catchment in the county with a radius of about 70kms. This extensive catchment VIS-a-Vis the increased tea production over the last 5 years necessitated the introduction of 2 high capacity CTCs and three driers.

The Factory has a fleet of 13 vehicles. A proactive approach in the fleet modernisation and improvement is being implemented. The Factory Board has adopted a five year replacement policy for the fleet which would ensure that the leaf collection operation efficiency is improved.

Kapkoros enjoys bi-modal type of rainfall that enhances two cropping seasons. The long rains seasons runs from February/March to June and short rains from August to November/December. The annual rainfall ranges between 1020mm and 1550mm with mean temperature of 16.20C to 21.60C.

The company is a limited liability company with a Board of directors elected directly by the shareholders. The Board authors corporate policies governing the conduct of company business. Basic operational unit is the leaf collection centre owned by a group of growers within a locality: The daily affairs of the centre are governed by a five member committee popularly elected by the affiliated tea growers.